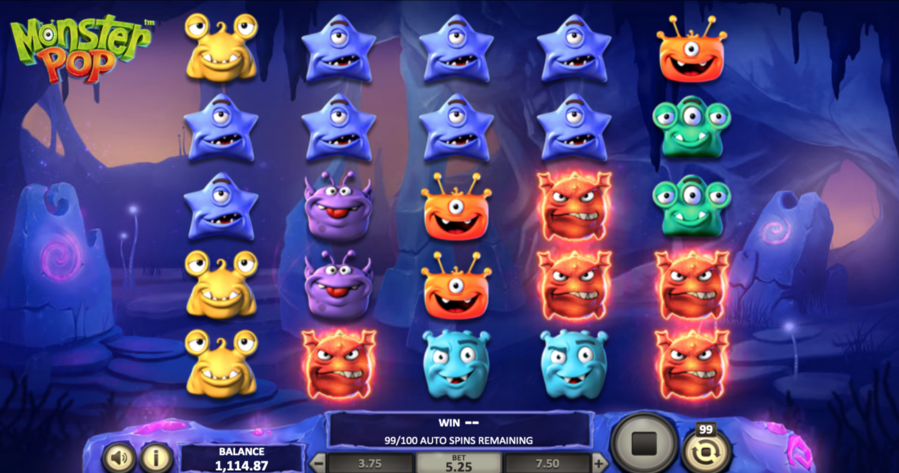 Monster Pop slot was produced and designed by Betsoft and released onto the market on March 26th of 2020. It sports the typical recent mathematical model applied to Betsoft slots which sees its RTP at 97.07% with a medium range volatility. It works on a cluster Pays system on a 5×5 grid which can expand with the aid of some base game modifiers up to a 13×13 grid. As the name suggests, the theme is that of Monsters, though they aren’t exactly too scary looking with more of a  cartoonish/comic feeling to things. Monster Pop has a maximum win of 1921x your stake, which isn’t huge, though we certainly wouldn’t mind any spin delivering that sort of payout. Read on for our full Monster Pop slot review and find some of the best paying, fastest paying and also USA player friendly casinos where you can play this slot at.

Play Monster Pop Slot at the Casinos Below

Monster Pop slot is a good cluster pays style game. The modifiers add some excitement to the spins and keep the game interesting as it feels like winning combos could form at any time even when a spin looks dead initially. The possibility for expanding the grid is also a great feature and makes for the chance to win big. This is especially unleashed during the free spins round and you’ll want to see the grid expand as early on as possible to give you the maximum chance of hitting it big. The RTP is pretty respectable at just over 97% and a medium volatility will likely see that your bank balance doesn’t get destroyed too quickly if it’s on a bit of a dry run. However, the maximum payout is perhaps a little small at 1921x to entice some players into giving it a go.

One of the base game modifiers of Monster Pop slot is the Monster Cloner symbol. This pink and silver symbol will expand the grid vertically, horizontally or if you’re super lucky it’ll do both – this can bring you up to a 13×13 grid and will keep expanding to this point until no more Monster Clone symbols appear.

These are the green and silver symbols which act as your Wild and can substitute for any symbol except for the Flaming Sphere free spins Scatter symbol and the Monster Cloner. You’ll also get one extra of these symbols with each Monster Cloner symbol you land.

If no winning combinations are made during any spin then you have the chance of Monster Fury triggering, this feature sees the Monsters get “angry” at you lack of win and they can create a “Cloner Bomb” which will spread Cloner symbols around, it can also shuffle the placement of the symbols to create wins by matching symbols together. 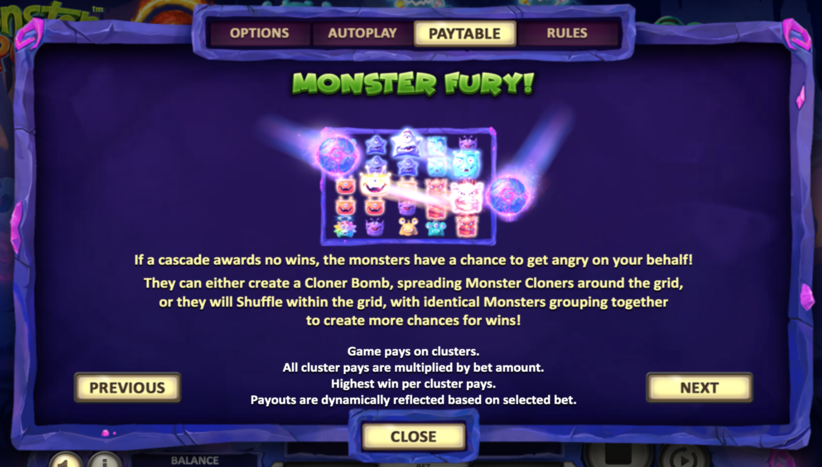 The sound effects consist of some whooshing noises, pops, and cute monster like sounds. The music is also kind of cartoonish sounding and goes pretty well with the Monster Pop slot theme, though i can’t see many people actively turning it up to have a better listen!

The symbols are all cartoonish monsters and look somewhat cute as opposed to frightening. They’re colourful and pleasing to the eye. It is set on a blue cave like background which turns to orange with fire at the forefront when you get to the free spins round. The highest paying symbol is the multicolored monster whilst the lowest paying is the three eyed green monster. You will get paid out when 4 symbols cluster together and this can go up to a cluster of a maximum of 1000 symbols.

Fat Cat Cafe slot is an October 2019 release from... END_OF_DOCUMENT_TOKEN_TO_BE_REPLACED

Bao Ni 8 slot was released in February of 2020... END_OF_DOCUMENT_TOKEN_TO_BE_REPLACED

Ape King slot is a July 2020 release from RTG... END_OF_DOCUMENT_TOKEN_TO_BE_REPLACED

Total Overdrive slot was released on February 13th 2020 and... END_OF_DOCUMENT_TOKEN_TO_BE_REPLACED

Spring Tails slot is a February 2020 release from Betsoft,... END_OF_DOCUMENT_TOKEN_TO_BE_REPLACED

Shadow Gods is a June 2020 release from RTG. It... END_OF_DOCUMENT_TOKEN_TO_BE_REPLACED

Monster Pop slot was produced and designed by Betsoft and... END_OF_DOCUMENT_TOKEN_TO_BE_REPLACED

Back to Venus slot is an April 2020 release from... END_OF_DOCUMENT_TOKEN_TO_BE_REPLACED

Quest to the West slot was released in May 2020... END_OF_DOCUMENT_TOKEN_TO_BE_REPLACED