Sausage Party slot was released on March 27th 2020 and is designed and developed by Blueprint Gaming. It features 5 reels, 3 rows and 20 paylines with an RTP of 95.95% and a medium to high variance. Sausage Party is absolutely packed full of bonuses, including 6 modifiers and 6 bonus rounds! If you’re wondering whether it’s worth a few real money spins then please check out our Sausage Party slot review below to find out what we thought of it, along with all the stats you need to know.

Play Sausage Party at the Casinos Below

Due to the Sausage Party slot machine having a medium to high volatility you’ll want to make sure that you play with a reasonable bank balance so as you get to experience the features and give yourself a decent chance of knocking out some properly good sized wins. The base game can be quite generous at times but, clearly, with a Sausage Party offering so many bonus features it’s that which it is all about. The slot is extremely well designed and captures the humour of the original movie brilliantly. The symbols on the reels are clear and attractive and the music and sound effects are top notch. The RTP isn’t as high as we would have like to have seen but we still highly recommend playing Sausage Party for real money.

The slot is based on the 2016 movie Sausage Party, an animated film which was written by Seth Rogan who also voiced characters along with Jonah Hill and James Franco. If you’ve seen the film you would likely know to expect a pretty lighthearted and fun slot game to accompany it, and you would be right.

As you would expect from the highest grossing animated R movie ever released, there has been no expense spared to create a really slick and great sounding slot game. The symbols you will encounter include the typical playing cards 9, 10, J, Q, K and A which pay 50x to 100x for 5 of a kind and then the characters from the film. Lowest paying are Lavash and Sammy Bagel Jr, with 200x for 5 of a kind, then Frank and Brenda with 300x, next are the Super Stacked Sausage Party symbols which give 500x as do the Sausage Scatter Symbols and the Wild symbols.

You’ll find various icon cut scenes from the movie spread throughout the game and played when any of the numerous bonuses are triggered. The entry to the bonus rounds also look really good with the bonus round triggered by landing 3 Scatter symbols seeing you transported down the isles of Shopwell Supermarket and stopping on the bonus you are given. All symbols are exactly as you would find them in the movie and they are big and brightly coloured on the reels. 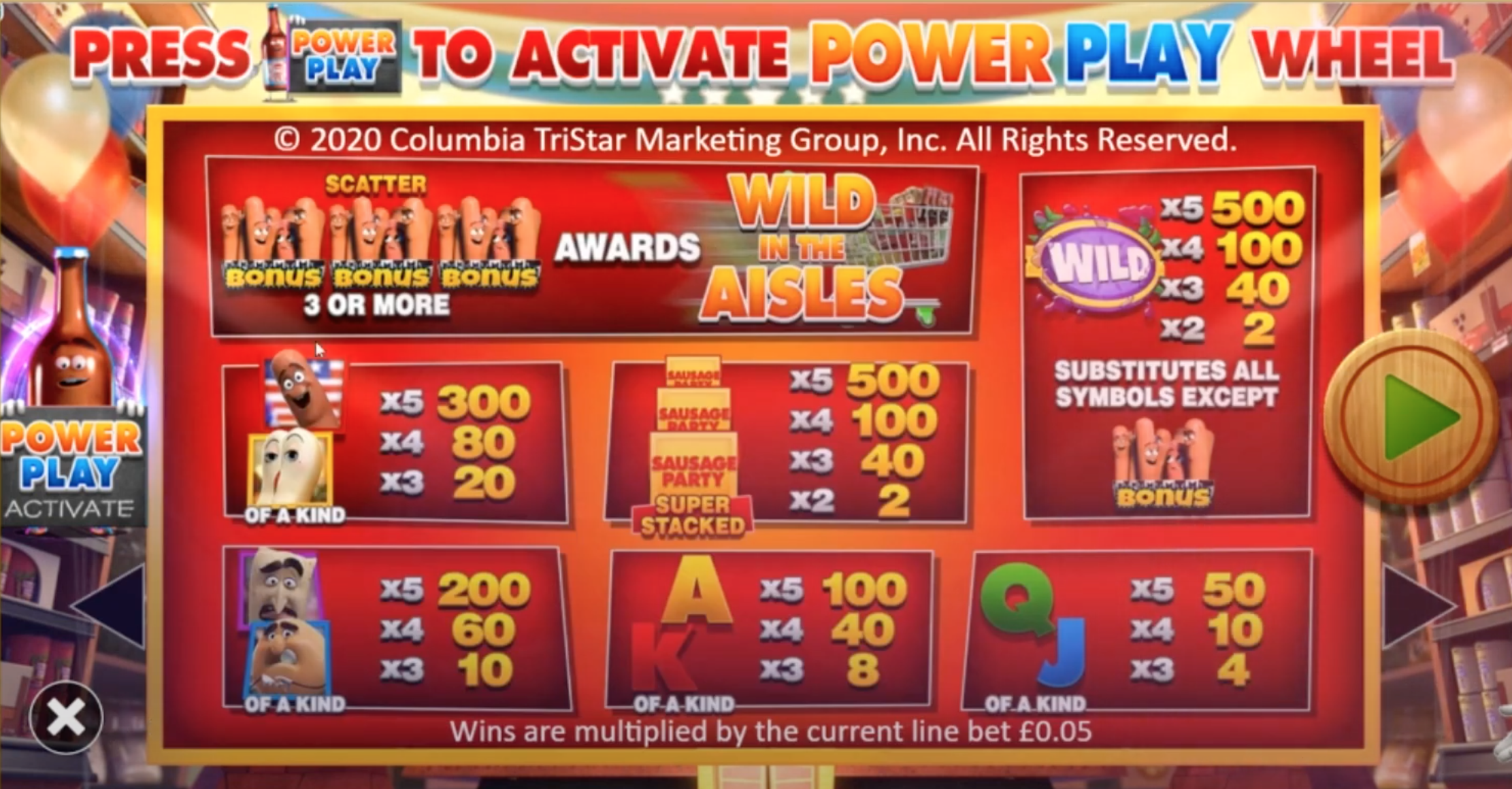 As stated, Sausage Party is absolutely ram packed with bonuses and it really helps this Blueprint Gaming slot into an exciting offering. First of all, there are 6 Modifiers which can be activated from any base game spin. This comes in the form of The Immortals, referred to as such in the movie as they are the non-perishable goods. Here the Mr Firewater character will appear in a cutscene and tell you to “choose your destiny”, you’ll then be taken to the screen showing the 3 immortal characters and you pick one which gives you a random bonus on your next spin which can be any of the following.

Touching Tips: A random number of Mystery symbols will be calculated before your bonus spin and you hope as many as possible land in view. When they do they all change the reveal the same symbol, hopefully a high paying one!

Skin On Wilds: The Potato character appears and is skinned alive above the reels, much to his apparent, but comedic, horror. Every reel his skin lands on turns that specific symbol into a Wild. Just how many Wilds you’ll be lucky enough to land of the reels is anyones guess!

Mighty Douche Colossal Reels: Three of the reels will turn into one colossal reel. Hopefully making for some spectacularly big wins!

Bath Salts Boost: This boosts the chances of bonus symbols spinning in.

Keen as F%$*in’ Mustard: A big winning spin is guaranteed to spin in if you get this bonus modifier.

At the end of each of these modifier bonuses you also get a spin the bottle bonus which can multiply your win or even give you a Wild in the Aisles” to trigger one of the bonus rounds.

There are also 2 other further Modifiers which can be triggered after a losing spin. he first of which sees a knife slice up the reels and rearrange the symbols into a winning formation. The other will see a dustpan and broom sweep the symbols up and do the same thing, putting them back in a winning combination.

Wild in the Aisles Bonus Rounds

Land 3 Scatter symbols to trigger the Wild in the Aisles bonus round. Once triggered you’ll be given one of 6 bonus rounds and you can gamble it for a different feature if you so choose to try and upgrade it to a better feature as is typical of Blueprint Gaming slots. The bonuses consist of the following:

Still Fresh Bonus: Here you choose from various packs of sausages, the longer your sausages evade being chosen the more you’ll win. Each pack of sausages you select will have a value attached to it. If your sausages get picked it’s game over.

The (Not So) Great Beyond Bonus: In this round you pick up food items which display a win value, a Double Win or a collect. As soon as you get the “collect” it’s game over.

Getting Juiced Free Spins: You’ll be awarded with free spins from this bonus some new symbols will be introduced, including the Douche. When you’re lucky enough to have the Douche symbols spin in he’ll collect the values from the 4 other new symbols. At the end of the round you’ll also get a chance for a super Douche symbol to land in and award more free spins.

Bread Bashing Free Spins: During this round free spins are awarded where if you land the Bagel and Lavash character symbols both at the same time they will be turned into Wild symbols. At the end of the round jars will appear over the screen and you pick one to reveal either a collect, extra spins or you can also trigger the Even Greater Beyond Bonus.

Bun in the Oven Free Spins: Here Frank and Brenda symbols are turned into stacked Wilds. If both symbols land in at the same time it’ll create a Brenda Hot Dog Bun Wild which will give you a 2x multiplier. Once your free spins are finished you can get a retrigger, a collect or trigger the Even Greater Beyond bonus.

The Even Greater Beyond Bonus: This is triggered by either gambling your feature up, landing in 5 Scatter symbols or in the two ways mentioned above the the previous 2 bonus rounds. During this bonus you get bet multipliers on your spins up to 500x. This feature ends when the X Stop lands in. 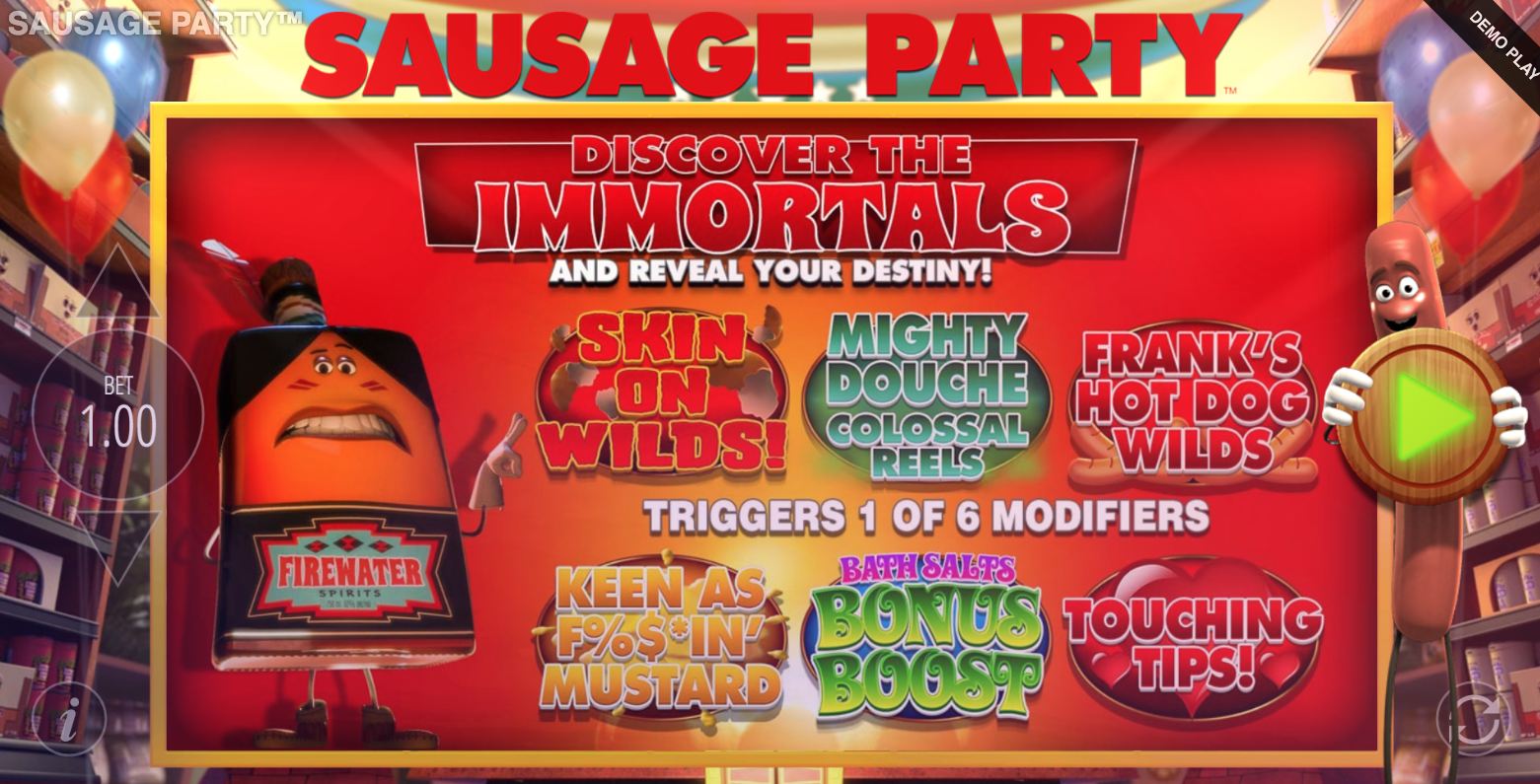 🆓 Does Sausage Party Have a Free Spins Demo Mode?

Yes, you’ll be able to test out Sausage Party slot for absolutely no expense at all until you get the hang of it and work out what the features look like.

💰 What is the Biggest Win Available on Sausage Party?

➕ What Are The Maximum and Minimum Stakes?

The minimum stake is 0.1 coins of your chosen currency. The maximum you can bet is 400 coins. This makes it an ideal slot for high rollers.

💱 Which Currencies Can I Play Sausage Party With?

Fat Cat Cafe slot is an October 2019 release from... END_OF_DOCUMENT_TOKEN_TO_BE_REPLACED

Bao Ni 8 slot was released in February of 2020... END_OF_DOCUMENT_TOKEN_TO_BE_REPLACED

Ape King slot is a July 2020 release from RTG... END_OF_DOCUMENT_TOKEN_TO_BE_REPLACED

Total Overdrive slot was released on February 13th 2020 and... END_OF_DOCUMENT_TOKEN_TO_BE_REPLACED

Spring Tails slot is a February 2020 release from Betsoft,... END_OF_DOCUMENT_TOKEN_TO_BE_REPLACED

Shadow Gods is a June 2020 release from RTG. It... END_OF_DOCUMENT_TOKEN_TO_BE_REPLACED

Monster Pop slot was produced and designed by Betsoft and... END_OF_DOCUMENT_TOKEN_TO_BE_REPLACED

Back to Venus slot is an April 2020 release from... END_OF_DOCUMENT_TOKEN_TO_BE_REPLACED

Quest to the West slot was released in May 2020... END_OF_DOCUMENT_TOKEN_TO_BE_REPLACED