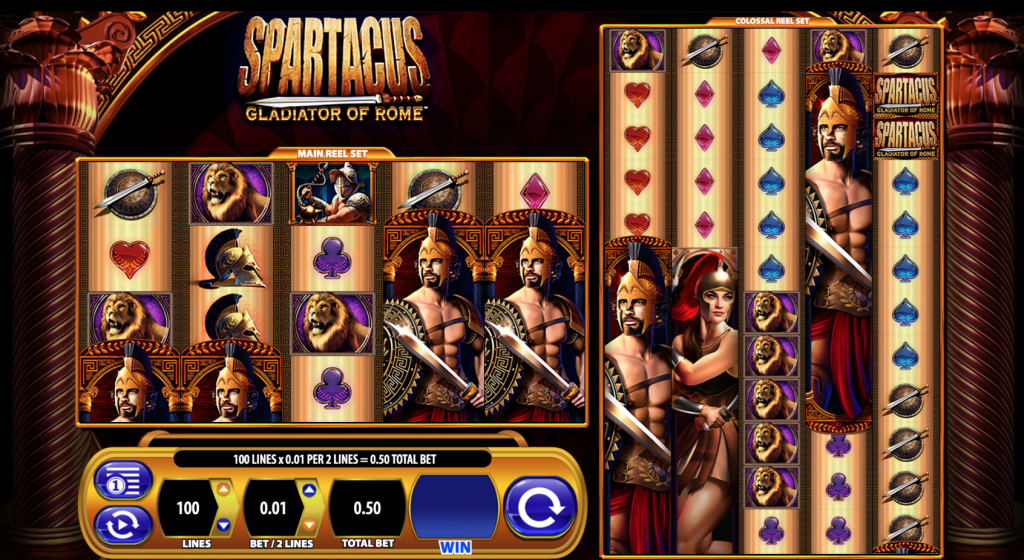 Developed by WMS and released to the online casino slots market in April of 2014, Spartacus Gladiator of Rome Slot Machine quickly gained its place as a players favourite. It is still one of the most played of all online slot games. It features the Colossal Reels layout, with 2 reels in play, firstly the main reel set and then the colossal reel. This can be a bit confusing at first but it does quickly make for a fun way to play. Whether you’re looking to play this slot game for free or for real money, read on and we’ll do our best to give you all the info you need along with some very respectable bonus offers!

Play Spartacus Gladiator of Rome at the Casinos Below 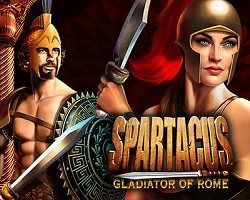 Spartacus Gladiator of Rome slot machine will give you an RTP of 95.94%, which is ok but nothing special in the scheme of things, with numerous other slots proving an RTP a percent or two higher. The variance levels are medium to low, with the slot being designed to give you a decent amount of playing time for your bankroll. However, if this level of volatility might not be to your taste, so consider trying out the free spins version to see what you make of it and discover if if you actually want to go ahead and play Spartacus online slot for real money. 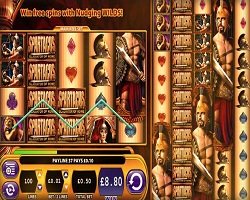 We have never been big fans of the graphics of Spartacus Gladiator of Rome, even when first released. Now they feel somewhat dated too, which is to be expected considering the slot was released back in early 2014. The imagery of the symbols on the reels includes both a male Gladiator that was assume to be Spartacus, here he’s holding a shield and sword standing upright. There is also a female gladiator welding dual daggers and looking somewhat dangerous! Other prominent symbols include a sword and a shield, a lion, a gladiator helmet, another gladiator welding an intimidating looking ball and chain finally a set of different playing card symbols all worth lower values.

When it comes to the sounds and music it’s perhaps a mixed bag. hen you’re playing the normal, non free spins bonus part of the game you’ll have the sounds of battle playing, like you’re hearing some ancient gladiators at war out on the battlefield. The sound effects to give with this can pull you out of this mood though with pings and bleeps etc but it’s well suited to the game overall. Should you land the 3 scatter symbols then a different type of music kicks in, more a battle ready vibe for the excitement that is about to come. This helps to create a thrilling atmosphere, though other reviewers have called it “epic” we wouldn’t go that far.

To bag yourself some free spins on Spartacus Gladiator of Rome slot you’ll need to land at least 3 of the Colosseum scatter symbols, which are also referred to as a feature symbol. Landing 3 will give you 8 free spins, 4 will give 12 and 5 scatter symbols gives the maximum bonus of 20 free spins. You can land these feature/scatter symbols on both the main reel set and on the colossal reels. However, they only spin in on odd numbered reels on both sets of reels, so you might not get as many chances of landing them as you may have hoped.

The Wild symbols are represented by an image of the colosseum and they are stacked on each set of reels. The ideal way to have them spin in is to cover a full reel. If you’re lucky enough to see this happen the on to one or more reel on the main reel set it will then transfer over onto the corresponding reels on the colossal reel set, giving both reels a full covering of Wilds. This is where you can land some big wins on the Spartacus online slot. Should you get 3 Fully covered Wild reels stacked on the first 3 reels then you’re going to be in for some very decent winning spins, and it’s this feature which has helped to make the colossal reel slot game become a success.

🆓 Can I Play Spartacus Slots Free?

“Is there a Spartacus free play option available?” is a question we often get asked. Yes, you will be able to play for free before you plat the Spartacus Gladiator of Rome slot game with any of your head earned real money being at stake. It’s always a good idea to have a few free spins first to get used to the layout of the game, find out what each feature symbol is worth and what the scatter and Wild symbols are. Especially when playing Spartacus slot with it’s different sets of reels , it’s well worth your time to familiarise yourself with how the colossal reel set works .

↕️ What is the Minimum and Maximum Bet I Can Make Per Spin?

When playing the Spartacus slot machine you’re going to be able to play from the minimum of 50c/p through to a huge stake of £/$/€250 per spin. So high rollers and those on a big of a tighter bank balance can both enjoy this slot machine.

🙋 Are There Other Gladiator or Spartacus Games Available As Online Slots?

💰 Is there a Progressive Jackpot Attached The Spartacus Gladiator of Rome?

No, unfortunately if you’re searching for a progressive jackpot feature then this could be a deal breaker for those who were thinking of spinning the reel of the Spartacus slot. It doesn’t matter how many symbols of any type you may spin in, the 20 free spins bonus is about as good as Spartacus slot can give you. This doesn’t mean to say you can’t experience some huge wins though.

Fat Cat Cafe slot is an October 2019 release from... END_OF_DOCUMENT_TOKEN_TO_BE_REPLACED

Bao Ni 8 slot was released in February of 2020... END_OF_DOCUMENT_TOKEN_TO_BE_REPLACED

Ape King slot is a July 2020 release from RTG... END_OF_DOCUMENT_TOKEN_TO_BE_REPLACED

Total Overdrive slot was released on February 13th 2020 and... END_OF_DOCUMENT_TOKEN_TO_BE_REPLACED

Spring Tails slot is a February 2020 release from Betsoft,... END_OF_DOCUMENT_TOKEN_TO_BE_REPLACED

Shadow Gods is a June 2020 release from RTG. It... END_OF_DOCUMENT_TOKEN_TO_BE_REPLACED

Monster Pop slot was produced and designed by Betsoft and... END_OF_DOCUMENT_TOKEN_TO_BE_REPLACED

Back to Venus slot is an April 2020 release from... END_OF_DOCUMENT_TOKEN_TO_BE_REPLACED

Quest to the West slot was released in May 2020... END_OF_DOCUMENT_TOKEN_TO_BE_REPLACED